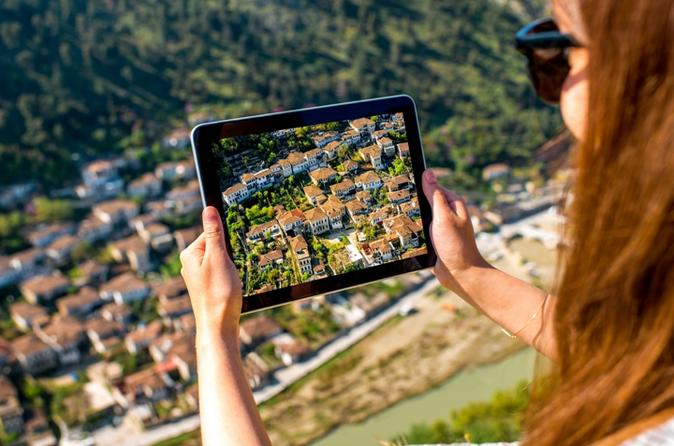 Prepare to be amazed during this 2-day tour while visiting the cities of Berat and Durres and learning more about their fascinating history and monuments.

Day 1:
Departure from Tirana at 9am and you'll be transferred towards the city of Durres. Durres, otherwise known as antique Dyrrah, due to its geographic and climatic position took a strategic place on the eastern shores of the Adriatic and in the region of southern Illyria. The tour of the Durres Old Town will include the ruins of the town forum, roman baths, city center, town hall, Roman Amphitheater, byzantine walls, Venetian tower and archaeological museum with a panoramic display of discoveries and urban planning of this once important city.

After the tour continue towards the city of Berat. On the way you stop in the charming Çobo Winery settled scenically at the base of Mt Tomorri, in the rolling hills that surround the city of Berat for an Albanian wine tasting.

The tour includes an extensive viewing of the wine making process and detailed explanations that paint a glowing picture of the family's history and the origins of their wines. After touring the grounds, guests are invited to share wine and exchange stories with a member of the Çobo family while enjoying homemade Albanian cheeses and locally grown olives.

Then, leave the winery and head toward Berat. This city is one of the oldest and the pride of Albanian architecture. Berat, known as the city of 'one thousand windows' is a treasure of Albanian history, culture and a testament to the country’s tradition of religious harmony.

Free time to stroll in the afternoon. Across the Osumi River lies the Gorica neighborhood, whose houses face those of Mangalemi. The arched bridge of Gorica, built in 1780, is a beautiful architectural monument constructed to link Gorica with Mangelemi.

Optional: Dinner in a restaurant with traditional cuisine (extra cost).

After breakfast at the hotel you'll start your tour of Berat. The three major neighborhoods of the old city are Mangalemi, Gorica, and Kala where the castle itself is located.

You'll start your tour with the castle area. Visiting the 'Kala' involves a steep walk up a cobbled path, but those who make it to the top will be rewarded with a fine view of the surrounding area. You will visit the Museum of Iconography 'Onufri' which bears the name of the renowned fresco- and icon-painter Onufri, who has left a rich inheritance. This museum is located within the cathedral of St. Mary’s Assumption. You'll also visit the Red Mosque, recognized by its lonely minaret and St. Trinity Church.

After the fortress, you'll visit the Mangalemi quarter and National Ethnographic Museum. This museum is located in one of the most characteristic and interesting houses of the town, a rich assemblage of traditional objects (more than 1000) and is one of the greatest examples of Berat’s long history and culture.

After the tour free time for a stroll in the city streets and return to Tirana.

Prepare to be amazed during this 2-day tour while visiting the cities of Berat and Durres and learning more about their fascinating history and monuments.